Feral Interactive's GameMode is a snazzy little utility which runs in the background and configures Linux's CPU settings for gaming. The below information is cut and pasted straight from GamneMode's github page.


GameMode is a daemon/lib combo for Linux that allows games to request a set of optimisations be temporarily applied to the host OS and/or a game process.
GameMode was designed primarily as a stop-gap solution to problems with the Intel and AMD CPU powersave or ondemand governors, but is now host to a range of optimisation features and configurations.
Currently GameMode includes support for optimisations including:

It's important to install both the 64bit and 32bit versions otherwise you will not be able to use GameMode with Lutris game launcher or with 32bit Steam games. Lutris automatically picks up on GameMode's installation and configures your games accordingly but Steam does not. To use GameMode with Steam you have to manually configure each game to use it. Luckily it's not to difficult. In your Steam game's properties you'll want to click the "SET LAUNCH OPTIONS..." button and enter 'gamemoderun %command%' into the box (see below). After this GameMode will run while playing and end when you exit your game. 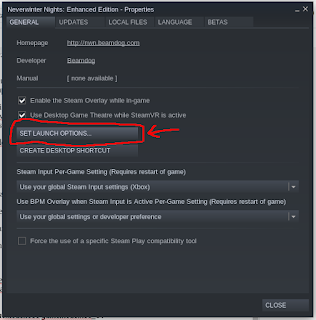 In addition to the utility itself I've been using the Gamemode Gnome Shell extension for a visual queue when GameMode is active. While not necessary to use GameMode I do get warm fuzzies from seeing the icon light up green while playing a game. 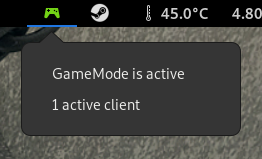 Although Fedora's dnf command will install GameMode for you below is their githib page with additional information and source code.

https://github.com/FeralInteractive/gamemode
at October 03, 2019 No comments: