Lets install The Vulkan for AMD graphic cards on The Ubuntu 19.04, bitch!

For my own sanity I'm documenting how to enabled The Vulkan on The Ubuntu 19.04. I used information form linuxconfig.org to make The Vulkan happen.

And that's it (mostly). If you want you may install the latest MESA drivers via the below PPA. It's not necessary but I guess it can't hurt (can it?). Each line is a separate command.

YO! Lets compile GameHub on Fedora 29

Welcome back, true believers! On today's episode of Spider-Man and his Amazing Friends we are exploring the compilation of the GameHub game launcher. GameHub is a game launcher supporting Steam, GOG.com, Humble Bundle DRM free games, and the Humble Trove. It has a really slick layout and oodles of configuration options for native and WINE based Windows games. But enough with the pleasantries, let's begin this action packed episode of Spider-Man and his Amazing Friends!

We will want to start out with the dependencies needed by Fedora 29 to successfully compile GameHub. Type or copy/paste the following into a terminal.

After the dependencies install we want to track down one more library needed to compile. This is libmanette. Manette doesn't seem to be available for Fedora 29 so I went to Fedora Rawhide to the package. Below are the steps involved in obtaining the package and installing it.

Go to https://pkgs.org/download/libmanette and click on the fedora link. You will want to download the libmanette-0.2.2-1.fc30.x86_64.rpm. Next use the following rpm command to install the package. Double clicking and installing the rpm via Gnome's Software application will not work.

Once Manette is installed we will begin the compile process. Use the below commands to obtain the GameHub source and compile the code. Each line is a separate command.

After all the dust settles you should find GameHub installed and ready to go. 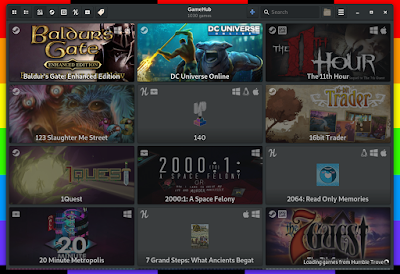 On recent builds of Steam Play's Proton I've not been able to use my gamepad under any games which use Proton's WINE based compatibility layer. In early betas of Proton my gamepads worked fine so I knew it was possible. I poked around my system checking for what might be causing Proton to not detect any connected gamepads. Using the terminal command 'lsmod' I noticed the 'xpad' kernel module was loading. I recalled historically 'xpad' could interfere with some gamepads even though it appears to work for most applications. I figured I'd give the alternative userspace driver xboxdrv a try instead. From my days of using a XBOX 360 wireless controller with the wireless dongle I remember using xboxdrv for better support and greater options.

I went about installing xboxdrv via the following command.

After installation finished I wanted to set xboxdrv to start at boottime. I did so using the following command.

And finally you'll want to start xboxdrv so you can begin using your gamepad right-away without a reboot. Use this command to fire it up.

Next time you connect your compatible gamepad you should be able to use it with Steam Play games.

For this how-to I used a SONY Playstation Dualshock 4 wireless controller connected via Bluetooth. It should also work for a legit XBOX 360 controller setup. I am not so sure about a XBOX ONE S controller as I couldn't get xboxdrv to recognize it being connected. This is via Bluetooth or USB.

After the long and winding road of attempts at getting hardware encoding working on my AMD VEGA 64 graphics card I have finally reached the final destination! That's right! I have hardware encode working. I know, I know. Many others have had it working before but I've never been able to find much information about getting it working in OBS Studio. Much less a readable how-to. I compiled OBS from source to include several of the included plugins but was able to use standard Fedora 29 packages otherwise.

I'll not dilly dally any longer. Here is my mostly complete how-to.


The following instructions are for FEDORA 29 only. Your mileage may vary on other Fedora versions.

First start off by installing dependencies needed by Fedora 29.

After you have your dependencies in order you'll want to download the source for OBS Studio via git.

After you have your source downloaded you'll want to enter the source directory and create your cmake build directory.

With the build directory made and entered you'll want to use the following cmake command to configure the OBS Studio source.

Hopefully cmake finishes without error so you'll be ready to compile. As far as I remember the above dependencies should be enough to get you going. Next you'll want to build the source.


make -j<the number of CPU threads you have>

After the 'make -j' you will want to put the number of CPU threads you have. As an example if you have a 4 core plus hyperthreading system you'll have 8 threads. So you will use 'make -j8'. This will speed up the compilation time. If you don't care about speed you can use plain old 'make' with no options.

When the build finishes without error you'll be ready to install OBS Studio into it's final resting place. To do so type in the following command.

At this point you are mostly ready to go. All that remains is configuring OBS Studio to use the FFMPEG VAAPI plugin for hardware encoding. To do so you'll want to start up OBS and click on the 'Settings' button in the lower right corner of the main window.  Next click on 'Output' from the left hand column. This is where you'll set the FFMPEG VAAPI plugin to encode.

First under 'Output Mode' you'll select 'Advanced' from the drop down menu. After 'Advanced' is selected it'll open up more options than before. Next refer to the below image for the settings I used to enable stable hardware encoding. I run a 2560x1440 monitor resolution so I needed to set the 'Rescale Output' to 1920x1080. Pay attention to the 'Encoder' drop down menu, this is where you toggle between hardware and software encoding.

Originally when using software encoding I'd sit at about 30% CPU usage when encoding at 1080p @ 60FPS on my RYZEN 7 1700x system. After configuring FFMPEG VAAPI hardware encoding I sit at about 2% while streaming with the same settings to Twitch.

If any of the above doesn't work for you please feel free to leave me a comment and I'll do my best to help you through your issues.
at March 14, 2019 No comments: