After a long absence a buddy and I returned to the excellent Bioware MMORPG Star Wars The Old Republic. At the time I was chugging along with the preview of Windows 10 on my system. Times were great and all was well in Star Wars land. That was until a weaponized space station, The Deathstar, dropped a mega shit bomb onto my operating system rendering it non bootable. You may say beta quality operating systems aren't for production systems. This time I hang my head and agree.

Long story shorter, I was in game when my OS froze. Upon restart Windows 10 wouldn't boot up. I know I could have researched the error and possibly fixed it. But come on! I was in the heat of battle when the crash occurred, with adrenaline pumping I hastily popped in an OS X installer USB drive. Roughly 20 minutes later all traces of Windows 10 had been obliterated and my System was booting into OS X. Great I thought, my computers working again.ts

Sadly while most everything else was working well I couldn't play The Old Republic. It's a Windows only title and requires Windows to play. I was running OS X. Oh the humanity!

I set the task of playing SW:TOR on OS X without dual booting or bootcamp. I figured failure was my best option but I embarked on the journey regardless. I tried several different methods including the VMware Fusion trial, Wineskin and Parallels. In the end I chose Parallels (version 10.2.1.29006 ) for my virtualization needs. So far I've been pleasantly surprised by my gaming experience vs the price for the Parallels software. More expensive than the free Wineskin and the $69.99 VMware Fusion. Parallels will cost you 79$ for a single user license, so I wouldn't expect or recommend someone to buy it just for a single game. But if you have other needs for windows apps alongside a game or two then it may be the product for you.

Although less than perfect you do need a copy of Windows to use Parallels. I chose Windows 7 64bit as I needed to address more than 4GB of ram. Windows 7 also has less overhead than Windows 8/8.1. In addition to a Windows operation system you'll need some pretty powerful hardware to pull this off. I recommend AT LEAST a quad core (i5 or i7) CPU of at least 3.3GHZ and about 16 gig of ram. You will also need a fairly decent video card. I'm using an older Geforce 660 Ti card, so anything within the past couple of years that's at lease the performance of a Geforce 660 will be fine. Also, your  video card needs about 1 - 2GB of RAM as 512mb of it will be used for the virtual machine. All of these specs are for Desktop products, on a laptop your mileage may vary.

Once you have created your virtual machine you'll want to configure Parallels for gaming. You'll want to go to the properties for your Windows virtual machine. Under the first tab at the top of the window (General) you want to choose Configure for : Games only. See below. 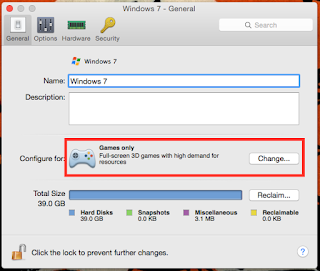 Once you have it configured for games there are a couple of other tweaks we need to make. The first tweak you'll want to make is to change the amount of RAM and CPUs the virtual machine will use. See Below. 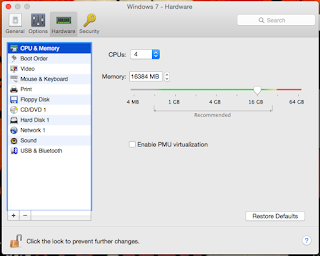 The Configure for: Games only sets the ram usage a little high to the point where Parallels complains about not having enough memory for video RAM. My general rule is to use half the amount of cores you have for virtual machine up to a max of 4 cores, I chose 4 cores as I have 6 logical and 6 virtual cores on my CPU. If you have an i5 CPU with 4 logical cores then set the CPUs to 2.
Same goes for the system RAM (Memory), I chose 16GB of virtual machine RAM because my system has a physical 32GB of system RAM. In theory you can set the memory higher if you have more than 16GB of ram. As long as you leave about 8GB for Mac use you'll be fine. 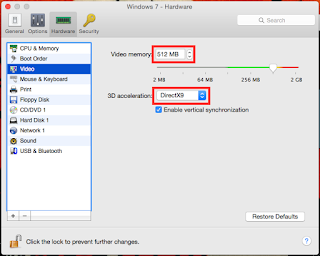 After you configure the RAM and CPU you'll want to select the Video portion of the configuration. Leave the Video memory: @ 512MB and change the 3D acceleration to DirectX9. Star Wars: The Old Republic only uses DirectX 9 so no need to virtualize version 10. After you've finished configuring you'll be ready to move on.

Once the virtual machine is configured you can start it up and install Windows. After the installation via Parallels you'll be ready to download and install the Star Wars game. I'll not go into much detail about installing the game. It's the same as under any other version of windows. If all goes well you'll be at the Windows desktop with the SW:TOR icon on the desktop. Double click the game's icon and you should be greeted by the logon window and eventually this... 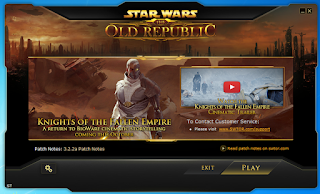 Once SW:TOR starts up it should be pretty much as it would be under non virtualized Windows. Below are my game settings for graphics, the game runs great with these settings. 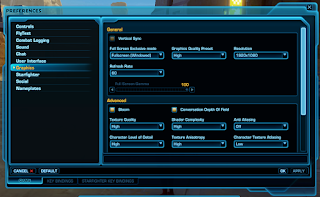 At this point I started playing and am currently questing on Tatooine. I haven't tried flashpoints yet but PvP warzones seem fine. I'm not so sure how 8 or 16 player raiding will go, If you try let me know.

I updated my build for the experimental flavor of OpenEMU. For those who do not know , OpenEMU is a excellent multi-system emulator shell for OS X. It includes modules for almost every classic system out there. You can download it from HERE.
at July 14, 2015 No comments: