First you'll need to make sure you have the RPMFusion repository enabled. To do so use the below command (1 long command)

then you'll want to fully update your system and reboot when it's finished (2 commands, 1 on each line). You might want to bookmark this page so you can come back and get the final few commands :)

next command... the magic happens. In addition to the graphics driver the 32-bit OpenGL libraries are installed so most my games work. (1 long command)

After the drivers install reboot your system one final time.

The above pretty much sums up how I install my graphic card drivers. It may look like a lot of crap to go through but it's not that bad. And more importantly, it works. 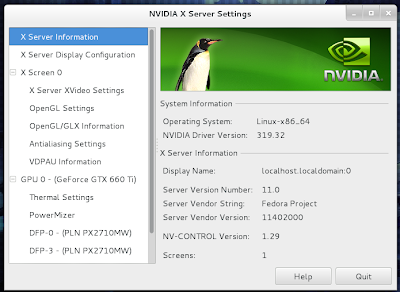